Originating from the northern flank of Mount Etna, this wine is made from 80 year old vines. With a bright light pink color, the nose develops notes of citrus and raspberries. The volcanic soil of Etna brings a lot of personality and intensity to this rosé. Mineral, powerful, peppery, it is endowed with a great freshness which will have all the capacity to balance the Chimichurri while emphasizing the Daurade.

This Breton in his early forties, raised in the “south” of the Gulf of Morbihan and fed on his grandmother’s good pure butter cakes, has a journey that is as well marked as his cuisine. After graduating from the hotel school in Saint Nazaire, he joined Marc Veyrat’s kitchens for a few months before settling in the well known “La Chaîne d’Or” in Normandy for almost two years. This was followed by several long and beautiful experiences in renowned establishments in Lorient and Cancale before finally landing in Mondorf-les-Bains to join Peter Körner at the Roses’ kitchen in 2005!

Attached to his origins, he grants a great interest to the less noble fishes like the mackerel or the sardine in order to give them some letters of nobility through cookings not always conventional but controlled. He also likes to mix the origins with particular peppers while preserving the seasonality of the products served; when there is none, there is none! His key word is “evolution”, no question of resting on his laurels, even if it means surrounding himself with excellent pastry chefs, for example, whom he accompanies in a process of de-sweetening of the sweets, but all in a gentle way. 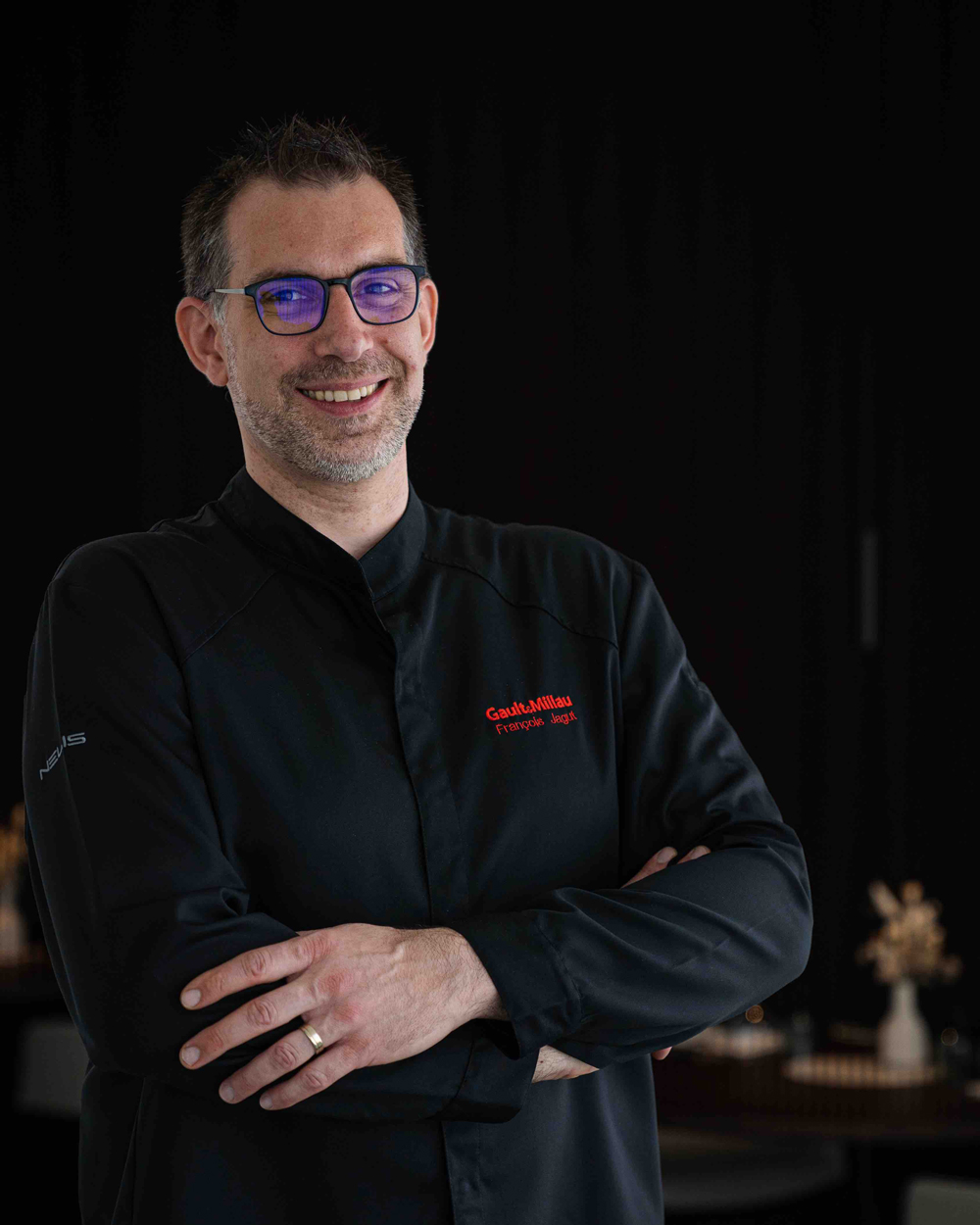 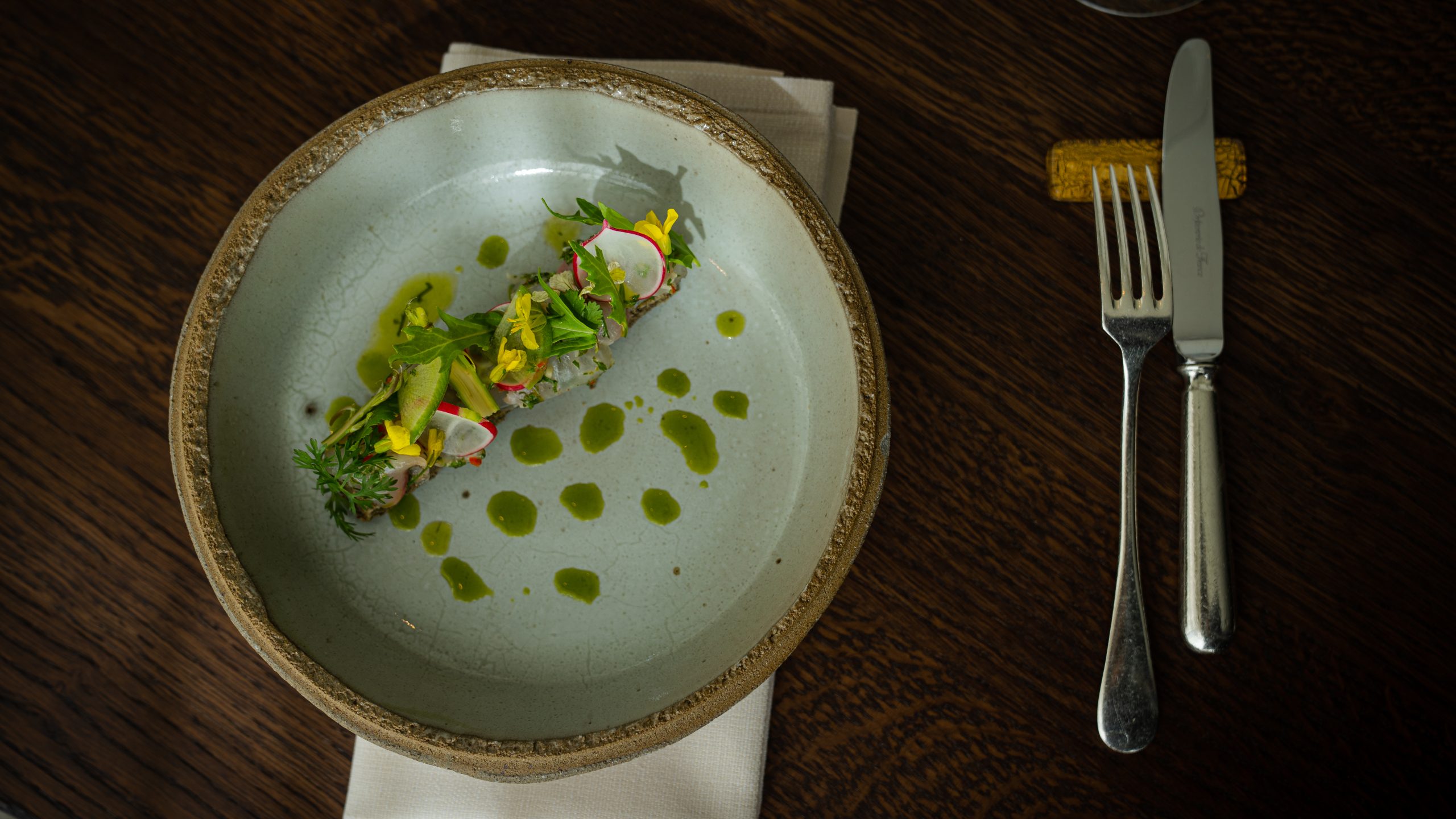 The waffle
1- Mix the flour, cornstarch, salt and yeast and add the beaten eggs.
2- Add the beer little by little while mixing continuously. Then add the melted butter. Let rest for 1 hour.
3- Heat a waffle iron, add a small ladle of preparation and cook for 5/6 minutes.

The Chimichurri
1- Finely chisel the flat parsley, coriander, chervil and press the garlic.
2- Burn the skin of the chili pepper, cut it in 2 lengthwise, remove the seeds then finely chop.
3- Zest ½ lime and squeeze the juice, add the red wine vinegar, season, then pour the olive oil over the whole.

1- Cut thin slices of sea bream with a knife, place them on a plate and drizzle with Chimichurri sauce.
2- Place the whole harmoniously on the waffle and garnish with a fresh herb salad and/or raw vegetable shavings.

Page load link
We use cookies on our website to give you the most relevant experience by remembering your preferences and repeat visits.
Read MoreCookie SettingsReject AllAccept All
Manage consent

This website uses cookies to improve your experience while you navigate through the website. Out of these, the cookies that are categorized as necessary are stored on your browser as they are essential for the working of basic functionalities of the website. We also use third-party cookies that help us analyze and understand how you use this website. These cookies will be stored in your browser only with your consent. You also have the option to opt-out of these cookies. But opting out of some of these cookies may affect your browsing experience.
Necessary Always Enabled
Necessary cookies are absolutely essential for the website to function properly. These cookies ensure basic functionalities and security features of the website, anonymously.
Functional
Functional cookies help to perform certain functionalities like sharing the content of the website on social media platforms, collect feedbacks, and other third-party features.
Performance
Performance cookies are used to understand and analyze the key performance indexes of the website which helps in delivering a better user experience for the visitors.
Analytics
Analytical cookies are used to understand how visitors interact with the website. These cookies help provide information on metrics the number of visitors, bounce rate, traffic source, etc.
Advertisement
Advertisement cookies are used to provide visitors with relevant ads and marketing campaigns. These cookies track visitors across websites and collect information to provide customized ads.
Others
Other uncategorized cookies are those that are being analyzed and have not been classified into a category as yet.
SAVE & ACCEPT

The abuse of alcohol is dangerous for your health. Drink responsibly.